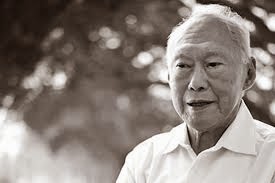 Just yesterday, the world witnessed the passing of a great Asian leader Mr. Lee Kuan Yew.  It is indeed a great loss to the nation of Singapore.  He was the man who created Singapore out of nothing so to speak.  Because when Singapore left Malaysia, the country had nothing.  It is a small island, there was little land for agriculture, or any industries, yet he built it into a first class country today.  Today Singapore has one of the highest standard of living in the world.

However, we know that he did not know the Lord which in a sense is a negative.  But God had plans and He used Mr. Lee to prosper Singapore.  Just like many pagans in Biblical times, God used them to prosper Israel.  God used Pharaoh to help in delivering the Jews out of Egypt to the Promised Land.  There are many similar stories in the Bible.

Pastor Kenny Chee of Singapore has written about Mr. Lee Kuan Yew.  You can read at the link here:

How Great is Our God

How Great is our God in Hebrew.