http://world-outreach.com/people/john-yolande-leroy/
Originally the New Hope Ministry in Sanggau, Indonesia was started by Yolande and John Le Roy of Australia.  This ministry help the poor children in the vicinity of Sanggau.  They have about 170 children now.  Late last year we at FBC were saddened to hear the passing of John Le Roy in Australia.  Our deepest condolence to Yolande and her children.  Over the years Le Roy had shared at our church his ministry and in fact many of our members are supporting the children financially.  Other organizations overseas are also supporting this ministry.  New Hope Ministry comes under the umbrella of World Out Reach International.  Please read more at the link above.

Last Sunday, a young couple and their three children came to visit at our church.  They were Merlinde and Jan Willem Tamminga, children Anna-Lyn 6 , Yanoah 4 and Sifra 2.  Merlinde & Jan Willem shared that it was by grace of God that they have taken over the management of New Hope Ministry (NHM).  As they were led by God to leave their previous ministry also in Indonesia, God showed them that NHM is their new calling.  It was God's timing that as Le Roy was called to heaven, the Tammingas are now taking over this ministry.  Willem shared that he is very blessed to have met Yolande and John Leroy last year as well as getting to learn about people of FBC through our German member Wolfgang and Heidi.  He was thankful that so many of our members are supporting NHM and he urged us to continue this good work.  Resources are limited in Sanggau and he appreciate whatever assistance he can get from all donors.  Beside financial supports, some of our doctors are proposing to set up a dispensary at the home so that trained personnel are able to administer basic medical help when needed.  This idea was most welcome by the Tammingas.

Praise God that NHM is in good hands now that John Le Roy is called to the Lord and the timing is perfect in our Lord God!  We pray for the Tammingas as well as New Hope Ministry that the work of the Lord will be enhanced and more people will continue to support them financially.

To God be the Glory!

You can read their blog at www.tammiesindetropen.nl 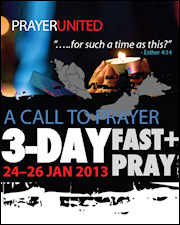 National Evangelical Christian Fellowship ( NECF ) Malaysia has organized a fast and pray from 24th Jan to 26th Jan 2013.  This is not the first of such fast and prayer, and perhaps sensing the tribulations and urgency of events unfolding in Malaysia, this fast and prayer is timely.  Beside, our country is heading towards the 13th General election before the middle of this year.  Our nation is at the same time entering the year of Jubilee.  Our nation is facing so many challenges from all fronts, and religion seem to be one of the  major issue that we have to handle.  No matter what man wants to do, God is sovereign and He is in control at all times.  For all who care of this nation, let us join NECF and other Christians in this nation to fast and pray for a better Malaysia.  Many pastors and leaders from all over our nation will be in Kuala Lumpur from 24th Jan to 26th Jan 2013 to fast and pray for Malaysia.  Those of us who are not able to join them in Kuala Lumpur, let us join our hearts in one accord to fast and pray during the assigned period.

May our Lord bless all Malaysians.

Labels: a call to prayer, fast and pray, NECF 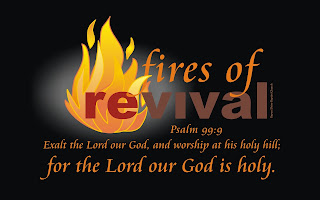 As we get into this new year of 2013 what seem to be foremost in the churches is Malaysia is the expectation of a revival coming to this nation soon.  Churches all over Malaysia have been praying for the past several years for revival to come and change this nation.  Malaysia has experienced more than one revivals, one in the 50's in Bario and another in 1973 also in Bario.  Bario is located in the northern region of Borneo. (Read the story at the link above).  A minister in the federal government Dato Sri Idris Jala was personally there during the 1973 revival.  Especially for Christians in Sarawak, the seed of revival has been planted.  Many Christians all over Malaysia are expecting the revival to start from Sarawak and spread to the rest of the country.  Even American evangelist Cindy Jacobs prophesied in August 2012 that revival will start from East Malaysia.  (Read the report here :http://allenstae.blogspot.com/2012/08/the-three-prophecies-on-malaysia-by-rev.html)

Personally I have attended many prayer rallies organized by Kuching Minister Fellowship (KMF) here in Kuching over the past three years and I witnessed Christians of all denominations crying out to God to send the Holy Spirit fire to our nation.  People are sensing the move of God that is taking place in our nation.  People are crying out for a righteous nation to arise out of this revival because God is in control no matter who govern this country.  Christians in this nation have to follow His commands, be obedient to Him and to cry out to Him to send revival fire to us.

In the most recent prayer rally on 12th Dec 2012 held at Calvary Family Church in Kuching, people young and old worship and prayed from 7.30 pm to passed midnight!  Hallelujah! and Praise God for His move!  It was heartening to witness that a large numbers of young people attending this prayer rally.

Let all Christians in this nation press on with our prayers and worship to God for a revival to change for better Malaysia !

All glory and honor to our God!

To people outside of Malaysia Christmas flash mob is just one of the many flash mobs that people organized.  But this is an historical event for Malaysia, more so because it was a Christmas Flash mob.  The majority of the Malaysians are Muslim, only about 10% are Christians, therefore since this flash mob can be conducted is something.  The flash mob was organized by a new and upcoming church TNCC Church.  This event garnered so much publicity that the local TV station RTM reported it in their nightly news!  Praise God for bring the Christian message to the public!  Pastor of TNCC Peter Sze said he was bringing the church to the public unlike tradition where the church is in a church building.  This is a very encouraging news to all Malaysian Christians and it was really God's work to enable such event to take place in public.  Malaysian Christians had seen their rights slowly being eroded and this indeed is a timely "present" to all Christians in Malaysia.

Let us continue to pray for our nation as we enter the year of Jubilee.  Thank God for all His provisions and His presence in this nation.