Recently, the Malaysian Federal Courts ruled that the Catholic Church's magazine, "The Herald" cannot use the word "Allah" to refer to God.  This controvesy has been dragging on since 2007 when the courts ruled in favour of the Catholic Church allowing the word "Allah" to be used in their magazine to cather to the Malay speaking believers mainly in East Malaysia.  The recent federal courts decision is most unsettleing to the Christan community in Malaysia, because the decision has wide implications to all Chrustians in the country and not only the Catholic church.  Nevertheless, Chrustians especially in East Malaysia say they will continue to worship as usually using the word "Allah" to refer to the Christian God.

Many see that this controvesy is a result of the ruling coalition's indecision or a lack of political will to put this controvesy at rest.  This has created very much uneasiness in this country, and unless the politicians are sincerely in resolving this issue, things could get worst.

Pastor Peter Truong and his wife Ruth had been ministering to our church since middle of this week.  Pastor Peter is from Brisbane, Australia.  He is Vietnaness Chinese.  His wife is from Vietnam.  They are married for one year.

Pastor Peter had visited our church two years ago.  During that visit he also ministered to Calvary Family Church (CFC) and a paralysed sister was prayed by him.  Over these two years, this sister is recoverying by God's grace.  She used to lay flat on bed, now she is able to sit on the wheelchair.  Amazingly during her paralysis she gave birth to a healthy baby girl !  Doctor advised her to abort, she had none of that and praise God she has a beautiful child.  Both her legs used to be paralysed, but now one of them is moving!  Hallelujah!  Praise God!  While praying for her at church this morning, Pastor Peter get the congregation to stretch our hands toward her while he prayed, he prayed and said he expect her complete healing soon.

Pastor Peter encouraged our congreagtion to pray for those who are infirmed.  Those needed healings are prayed over by our members, as he also prayed for everyone who needed healing.  The ordinary way that he conducted the healing service is amazing.  We realized that we as part of the body of Christ are empowered to heal in the name of Jesus.

Another sister of our church has been healed of deafness on her right ear.  Sometime ago she went for a brain surgery and that had destroyed her hearing, but Pastor Peter prayed for her on Thursday night and she is healed!  Hallelujah!  Praise God!

A grandfather testified that his grandson has also been healed of stomach problem.  His grandson had been to hospital three times, yet his condition persisted, he could not drink and eat and was weak.  On Wednesday, the Holy Spirit prompted his grandfather to attend Pastor Peter's healing service and when Pastor Peter sensed that he needed to pray for someone with stomach ailment, this grandfather brought his grandson to be prayed by Pastor Peter.  This morning, the grandfather testified that after the prayer that evening, the grandson took a banana where previously he refused to eat because of the pain.  The following day he had chicken rice and pizza!  He is completely healed!  Praise God for His mercy and healing!

There were many more healings and the congregation could feel the presence of God in our church this morning.   Thank God for bringing Pastor Peter and his wife Ruth to minister to us. 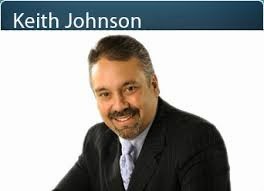 Last week our local FUll Gospel Businessmen (FGB) fellowship brought in America's No. 1 Confidence coach for a two-sessions workshop.  It was indeed a blessing for Kuching's folks because Keith Johnson came all the way from America and the entrance fee to attend was just RM10 each!

The seminar was a success, the room was packed with at about 200 people of Thursday evening.  Friday morning;s session was also well attended.

Keith Johnson was a funny speaker and he kept everyone on his toes with his many jokes.  Jokes aside, we learn many valuable tips about building confidence and how to have confidence in our lives.  Confident seems to be everything in a successful person's live.  Lack of confidence is usually a person's reason for failure.  Success is not necessary measures by monetary returns, but a productive live in areas of your passions.  Like a Pastor can be successful but not necessary rich in a worldly manner.

One great point about this seminar was that it was based on Christian principles and Dr. Keith Johnson has a graduate degree in Theology.  He sharing was backed by Biblical principles.  Unless we have God, we cannot be successful.  In one of his "triangle of confidence", it contains God as one factor.

All in a useful and beneficial seminar on confidence building.