Pilgrimage to the Holy Land 5 - The Dead Sea 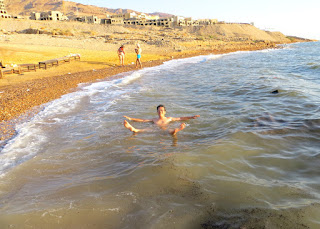 As part of the Holy Land pilgrimage we also had the chance to spend a night at a hotel by the Dead Sea.  This mystical lake is beautiful.  The lake is located at the lowest land point on earth, about 1338 ft below sea level.  We could see that the bus had to drive lower and lower near to the lake towards the hotel we were staying.  The Dead Sea is 34 miles long and 11 miles wide, so it is very large.

In terms of the Bible there were few references to the Dead Sea.  In the Bible this sea was called,  "Sea of Arabah", and "Salt Sea".  Pre-Biblical times, it was also called "Sea of Sodom" or "Sea of Lot".  The Ammonites and Moabites when advancing to attack King Jehoshaphat (2 Chronicle 20 ) of Judah had to cross over from a shallow section of the Dead Sea.  King David was known to have hidden in the caves at Ein Gedi near the Dead Sea.  Ezekiel prophesied that the sea will become fresh Ezekiel 47:8-9.  Zechariah had a similar prophesy Zechariah 14:8.

The now famous Dead Sea scrolls were discovered at Qumran near to the Dead Sea.  We had the chance to visit Qumran.