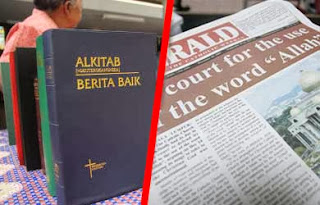 It was a dark day for Malaysian Christians on 2nd Jan, 2014 the start of a new year when the Selangor Islamic Religious socirty (JAIS) raid the Bible Society of Malaysia(BSM) and took away more than 300 copies of Malay language and Iban language Bible which contained the word "Allah" refering to God.  The Muslims in Malaysia insisted that the word "Allah" is exclusive to Muslims in Malaysia.  Other Muslims communities around the world have never claimed exclusivity of the word.

The "Allah" issue has been draging on in court for a numbers of years and it has not been settled yet.  Basically it was the government who started this issue when they banned the Catholic Herald from using "Allah" in their Malay news publication.  Yet, the government is silent on this issue and in the process has created degradation of relation between these two communities in Malaysia.  It appeared that the government is dragging its feet in an attempt to gain political mileage.

Despite the persecutions of Christians in this country, we continue to persevere.  We have been taught in the Bible that when we follow Jesus we are bound to be persecuted.  Let us respond like how Jesus taught us.  But we pray that in whatever the others want to do to us Christians all these will turn to good.