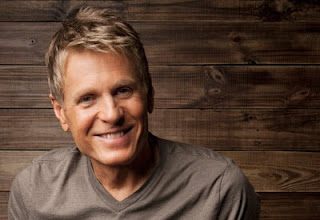 On 6th March, 2013 reknown Gospel singer from the US Steve Green gave a heart warming concert at Trinithy Methodist Church, Kuching.  All in 1300 people attended this very first Steve Green concert in Kuching.  It was indeed a blessing for the Christians in Kuching because Steve was taken ill for a couple of days prior to his performance.  Before the concert the Christian community in Kuching prayed for his speedy recovery.  During the concert, he shared that if his voice quit on him that was that.  But by God's grace he continued to sing to us.  I am touched by his humility, despite his condition he continued to sing.  At a few instances in the process of singing, his voice broke and he could not carry the songs, but praise God that his brother was there to back him up, he continued singing!  Unlike conventional concert, the audience may not accept such hiccups, but in this Christian concert it was different.  Steve was humble to acknowledge his human weakness and the audience accepted that like brothers and sisters in Christ.  He engaged with the crowd and requesting the audience to join him in singing "Amazing Grace".  The other humbling experience was that Steve and his team came to Kuching by the leading of the Lord, and they were self financed. In order to help his ministry worldwide, a love gift collection was made.  I believe the audience gave generously.  This concert was indeed God's gift to the Christians in Kuching.

You can read more at the link above.