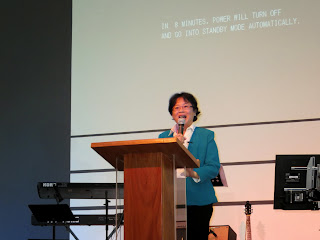 http://www.tabernaclemusic.net/index.cfm?menuid=279&parentid=17
On 13th Oct 2013 our church had the previlege to host Gospel singer/song writer for an evangelistic outreach to the people in Kuching.  It was organized by our Mandarin church for the purpose of evangelising to the losts.

The testimony of Sis Joanne was very powerful as she came from a Chinese family back ground that was familiar to many of us.  Her mother was a temple medium and she was brought up staying at the temple.  Her mother would go into trance in worship to her gods, many times multilating herself in the act of seeking favours on behalf of devotees.  Joanne often cried because she did not like what her mother was doing.  She felt that her mother had a hard life serving her gods.  While she was about 11 her friends introduced her to Jesus.  She learnt from her friends and eventually at 13 years old she accepted the Lord!  After that she felt much peace and she could sleep well.  Her mother despiced her for accepting a "foreign God".  That was how many Chinese non believers understood about God. Through Joanne's prayers and worship her mother slowly changed and accepted her as a Christian. One day she took her mother to church, and her mother felt peace and wanted to become a Christian.  When the pastor gave an altar call, she went forward and accepted Jesus as her Savior.  However, after she got home she still worship her gods.  Joanne rebuked her for doing so, but her mother said she was afraid that her gods will come after her that was why she worshipped them.  Eventually, with prayers and help of Joanne's pastor all idols were removed from her house.  She accepted Jesus as her personal Savior and felt much peace.  Her dad only came to the Lord in his old age of about 73 years old.  At that time he was suffering from cancer and had to take morphine prescribed by the doctor.  Before he came to the Lord, God showed him the beauty of heaven, with many beautiful flowers, nice buildings, and pleasant environment. He yold Joanne he was ready to be a Christian and requested for a priest to baptise him.  He wanted a priest and not a pastor, and that was arranged.  He was baptised accordingly.  That night he had the most restful sleep, and he slept until 10 am the next day which he never did before! Praise God!

We thank God for such an inspiring testimony.  Sis Joanne made her session interesting because as she shared and she interceded with her Gospel songs in Hokkien and Mandarin.  She wrote all her Hokkien songs.  The amazing fact is that she could not read or write Mandarin yet she could write Mandarin Gospel songs. This is also a testimony of a great God we worship!

At the end of the meeting, Sis Joanne made an altar call as well as praying for those in need.  Many people came forward and the most encouarging thing was that five people accepted the Lord that evening.  Praise and thank God!  Hallelujah!  All glory to God!

To read more about Joanne go to the link above.