Isreal, The Church and End Times 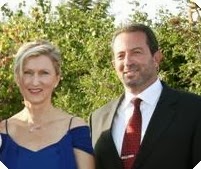 The Full Gospel Businesmen Fellowship (FGB) organized a seminar entilted "Isreal, The Church and End Times" on 27th Nov 2013 at Trinity Methodist Church, Kuching.  The speaker was David Silver a New Zealander based at Mt.Carmel, Israel.  Since moving his family to Isreal in 1992 he and his wife have been sharing with people around the world to support Israel because of the prophesy in the Bible.

He said that the western world is declining spiritually and Isreal needs the support of Christians from Africa and Asia where Christians are already fervently praying for Isreal.  Christians need to support Isreal because this is God's prophesy in the Bible.  The Isrealites are the chosen people of God Deuteronomy 7:6-8.  God wants to bless people through Isreal Isaiah 27:6.

The end times is also drawing near, and all of us are to pray for Isreal and that Jesus will return to Jerusalem as it was prophesied in Act 1:9-12, Zechariah 14:4-5, Matthew 24:44.  Since the creation of the nation of Isreal in 1948 many nations are opposing Isreal because they
claimed that Isreal has occupied Palestinian land.  However, the Bible said this is the Promised Land that God has given to Isreal.  It belongs to God not anyone else.  Sadly David said many Christians denominations are also supporting these nations to oppose Isreal.  But as Christians we are tied in with Isreal since this was prophesied in the Bible.  You can say Christians shared the same heritage as the Jews.

David urged all Christians especailly those from Asia to pray fervently for Isreal untill Jesus return to Jerusalem. If there is no Jerusalem, the Son of God will not be released from heaven.  Prayers are powerful and we all know that.

Next David played a short video of a orthodox Jew singing "Cry No More".  It is about the hurts people inflicted on the Jews and they cried to God "No More", they realized the importance of the Jewish nation.  Although the orthodox Jews do not believe in the Resurrection, the video depicted a dead child coming back to life again.  The powerful prayers were shown as prayers written of papers inserted in the Western Walls flying out destroying missiles and finally forming the Temple of God.  Watch this video here: