Standing Together For Religious Freedoom 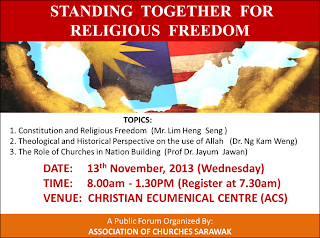 A public forum was organized by Association of Churches Sarawak (ACS) at ACS building in Kuching.  The forum came about because of the current controvesy in the use of the word "Allah" to refer to the Christian God which the Muslim claimed they have the exclusive right.  The Court had recently passed judgement prohibiting the Catholic Herald to use the word "Allah" refering to the Christian God in their publication.  However, the Christians in this country do not think so as religious freedom is enshrined in the Federal Constitution. 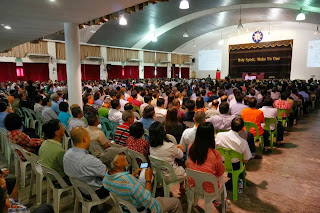 1. Constitution and religious freedom by lawyer Lee Heng Seng
2. Theological and historical perspective on the use of Allah by Dr. Ng Kam Weng
3. The role of churches in nation building by Prof Jayum Jawan

The show of support from all Christians denomination was very encouraging as more than 1,000 Christians from various denominations went to listen to the speakers.  Leaders from Hindu and Buddist oragnizations were there too.

These talks were very helpful because they explained the rights of all people under the Federal Constitiution.  Most importantly they explained why Christians should take their stand in this issue.  When Sabah and Sarawak joint Malaya to form Malaysia, the freedom of religion was enshrined in the Constitution especially Article 3 but the Court chose to re-interpret as if all other religions are subsevient to Islam.  This was not the case at the time the Constitution was drawn up.

One of the speakers said it rightly that all Christians will continue to use Allah in our worship and practise of our faith untill the second coming to Jesus Christ!  Hallelujah!  Praise God!

Note: you can read the full statement of Archibishop Datuk Bolly Lapok in the above link.
Posted by FBC -Cell J at 8:04 PM