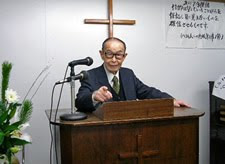 The world’s oldest actively serving pastor died this past weekend in Japan. He was 101 years old.

The funeral service of the Rev. Tsuneharu Oshima was held Monday at Mikage Shinai Church in Kobe city, Nagoya, Japan.
During his funeral, held at the Japan Assemblies of God-affiliated church, attendees watched a video of Oshima’s speech in July 2009 during the 150th anniversary of Japan’s Protestant Mission. The audience was deeply touched as he spoke about the past, present and the spirit-filled vision for the future.
Oshima passed away on Saturday at 1:45 p.m. (local time) at a hospital in Kobe. Up until his last few days, Oshima spoke the words, “peace, gratitude, victory, hope.” He passed away in peace.

His memorial service was held on Sunday and attended by some 250 people from throughout Japan.
The pastor’s eldest son, the Rev. Yoshinao Oshima, shared that his father continued to work as a pastor even after he turned 100 years old.
“He gave us hope for heaven, served as a path for Lord Jesus Christ, and became a blessing and hope to many people,” the younger Oshima said, according to Christian Today Japan.
The older Oshima had served as an active pastor for 74 years. He was senior pastor at Kobe Philadelphia Church, part of the Free Christian Missionary Fellowship. His son, meanwhile, is serving as assistant pastor at the same church.
Last year, Oshima celebrated his 101st birthday on Oct. 5. But on the eve of his birthday he was hospitalized with pneumonia. He was released after a month, but was repeatedly hospitalized for various illnesses. His fourth visit was his final.
Christians make up two percent of Japan’s population, according to the CIA World Factbook.