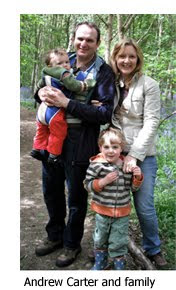 Our Church has the previlege of hosting John and Andrew Carter from the U.K. John Carter(Senior) is no stranger to many Malaysians as he has been sharing the gospel with many Malaysian Churches over the past three decades. A few months ago Andrew hosted a conference at the Association of Churches Building, followed by sermon at our Church.

Father and son theme will be taking us through Romans Chapter 1 to 8 over four nights starting 5th July to 8th July starting 7.30pm to 10pm each night. All are welcome!

John Carter - is a leading elder in Holborn Church,Leeds, UK with a teaching ministry in an independent evangelical church. He is a retired engineer and worked as a "tentmaker" financial consultant for 14 years, Since 1977, he has ministered in many churches in Malaysia.

Andrew Carter - Eldest son of John, is pastor of Therfield Chapel a reformed evangelical church near Cambridge, UK. He trained at King College London earning an MA in Systemic Theology.

On Sunday, Andrew gave a sermon to our Church on John 19:16 , he said that many gospel writers were not balance in narrating the life of Jesus, most of them narrated a large portion on His death and resurrection. The Cross is crucial to Christianity. When Jesus said "It is finished", many interpreted it as if He said "I am finished", but that was not the case. "It is finished" meant He has finished His work, or He has completed His work here.

You can find out more about Therfield Chapel at www.therfieldchapel.org

Note: above picture of Therfield Chapel
Andrew Carter and his family
Posted by FBC -Cell J at 2:49 PM