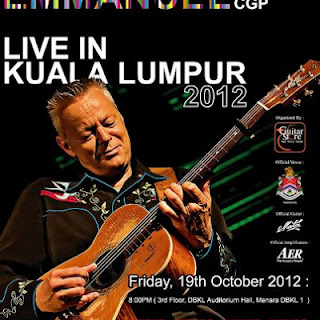 Tommy Emmanuel, the great guitarist performed live at DBKL, KL on 19th Oct 2012.  I missed his performance in Kuala Lumpur some 14 years ago, so this time around I had the opportunity to watch him live in K.L.  Listening his CDs and watching him live is totally different.  His performance was phenomenal and very entertaining.  In his own words, he said his music does not need computer enhancement, nor half naked women running around to attract attention!  Indeed it was true that he just used his acoustic guitar, amplification and nothing else.  His music was pure and very enjoyable.  Any one who likes guitar music will like his songs.

Before, posting this I was wondering whether Tommy is a Christian.  A little internet search I found that he has been a Christian since he was young and he has been walking closely with God since.  He has also composed a piece of Godly music like "Tears for Jerusalem".  This wa what he said about his Christian life,
" Well, I can remember going to Sunday school when I was a kid, but it wasn't until I actually made a commitment, got baptized and accepted Christ that it - then I had a revelation that I'm not running this ship. It's my job to get out and play the guitar and let God do the rest. Stay out of his way. Just play the guitar and do what you're meant to do. That's my job."
Praise God for this talented guitarist!  May he uses his music to bless many people all around the world.

During the show he played an original song inspired by the Red Indian flute he heard while conducting a concert in their honor.  Watch this video: