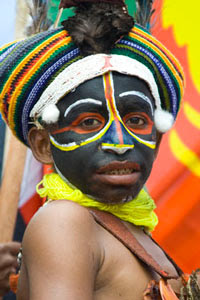 Pastor Liaw and Mrs.Liaw are missionaries to Papua New Genuine(PNG). Pastor Liaw hails from Sarawak. They have two grown daughters Joys and Mercy. Their main aim was to translate the Bible to the native PNG language. They served among the Hinihon, Perare, and Hinangave people. These villages are deep in the jungle and to get there they have to track many hours to reach the villages.

Mrs. Liaw said that about 27 years ago she suffered from severe kidney problem and had to be treated regularly. She did not know how long she will live so she worked for a Christian organisation in Kuala Lumpur, and at the same time she could get treatment from the general hospital there. Pastor Liaw studied at a Bible college (MBS) for one year in Kuala Lumpur.

After his studies, the Liaws went to Papua New Genuine( PNG). Pastor Liaw said it was a calling, because otherwise he would not have the strength to go to such remote place. They faced many challenges there, and because of God’s love and grace they were able to continue with their work there. They have two assistants whose education was about form three level and they helped with the Bible translation. Because of their limited knowledge of the Bible, most of the work had to be done by the Liaws.

Pastor Liaw shared with our congregation Matthew 9:35-38. In particular verse 37

37Then he said to his disciples, "The harvest is plentiful but the workers are few. 38Ask the Lord of the harvest, therefore, to send out workers into his harvest field."

The harvest field is large but there are few people to help. People asked Pastor Liaw why did he reach out to PNG villagers when he could have gone to China to touch many lives. He said going to PNG was his calling. Like Jesus, he wanted to touch individual live. People asked him it is worthy it to do so much for so few people? ( The village the Liaws is based has about 1250 people. PNG has 5 million people). He said as long as he can love the people like Jesus it is worth it.

Pastor Liaw is really living like Jesus and love like Jesus. He and his wife is such an inspiration to our congregation. Recently Pastor Ben Wong has preached that we need to love people more and to build up relationship with each other. Indeed, Pastor Liaw’s sharing is a good example for us to learn how to love one another like Jesus did.

Pastor Liaw said one of the important lessons he learnt is to get away from self-fulfilment through performance and result orientation. Like many present mega church pastors, they look to growing their churches. People became statistics. That should not be, we should love people. He urged us to obtain our fulfilment from Jesus alone and not from anyone or any other things.

Thanks Alwin for all the updates keeping us well informed. especially during our time away from home !

Chuei Lian you are welcome! Praise God that your dad is well. You take care.
Alwin