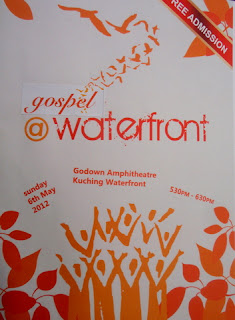 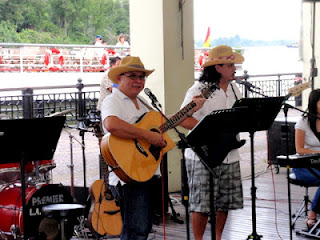 Gospel Hour is a one hour Gospel songs presentation organized by SIB Church ( Sidang Injil Borneo) or Kuching Evangelical Church.  It was held at Kuching Waterfront this evening from 5.30pm to 6.30 pm.

I came to know about this event from Pastor Wilfred Jaboh's face book page where he advertised this event.  Pastor Wilfred is the pastor of SIB and he is also a personal friend.  It was great catching up with him again.  According to him his Church organizes such events at the Waterfront 4 times in a year.

This is a Christian event and praise God that the authority allowed such event to be held in a public area.  It is a tourist area too.  Glory to God.  Although Gospel messages were not preached, they were in the songs presented as well as the presenters add in short messages between songs.

Beside Pastor's presentations there were two other groups from his church as well as a Christian band, if not mistaken called "The Shine".  The songs were mostly in English, a few in Bahasa Malaysia and one in Mandarin and one in Hokkien.

Praise God that the event was well received!  About a hundred or so people were at this event.  A few Western tourists were there too.

This is one way to evangelize to the public, through songs.  Seeds can be planted through these songs, and pray that these seeds will germinate in those non believers who attended this event.