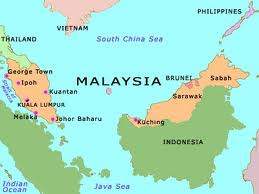 Last evening, a few brothers and a sister from FBC attended the Kuching Minister Fellowship (KMF) monthly prayer meeting at SIB Bau. For the past one year or so the monthly prayers meetings had been at Churches in Kuching city. It was given to understand that KMF wants to bless the churches outside of Kuching city, hence the first prayer meeting was held at SIB, Bau. Bau is a town about 40 minutes drive from Kuching.

The prayer was attended by Churches from Kuching such as Faith Methodist, Good News Fellowship, High Priest Church, FBC, Emanuel Baptist, Christ Baptist, Calvary and Anglican Church. From Bau we had SIB and Methodist Church Bau.

We witness the heart felt prayers of those who attended. People from various churches worshiped in unity for a common purpose of praying for our nation as well as for revival to start in Sarawak.

From the slide show you can see the first slide of a picture that resembles the map of Malaysia, Peninsula on your left and Sarawak & Sabah on your right. About two years ago a group of pastors gathered to pray at Lundu, during a break in the evening they saw this picture in the sky. It was vivid and the pastors realized that it was a revelation from God to pray for our country. Since then many wonderful and fervent prayer meetings had been held in Churches in Kuching.

Thank God for His leading. Let us continue to gather to pray in one accord regardless of denominations. In God's eye all His children are One.