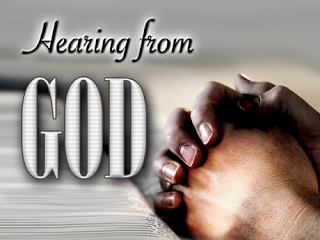 A self explanatory article. Please read.

A friend alerted me to an article by R. T. Kendall called 'God Told Me' . . . Really? that says something I've thought for a long time but have never been able to put into words. Kendall is talking about tendency of evangelicals in general (and charismatics in particular) to say "God told me" when they think they have received some sort of message from the Lord.
There are many reasons why this is a bad idea, not the least of which being that just because you think you have a message from the Lord doesn't mean it's anything other than your own idea. Now that idea (or thought or insight) might in itself be true and good. Or it might be a useful consideration. But that's not the same thing as "Thus saith the Lord."
Kendall wades right into the middle of this and exposes what lies at the heart of it all:
How do we misuse God's name when we claim He told us something? With our intent. Most often we mention Him for one reason: to elevate our own credibility. It is not His name we are thinking of, it is our reputation. Adding the weight of God's name to our words gives us authority and respectability. But the truth is, we're not thinking of God's name and glory when we do this—we're thinking of our own.
Ouch! Talk about hitting the nail on the head.
Kendall offers this wise advice:
Likewise, if I truly have a word from the Lord, I can say it without mentioning His holy name. It will speak for itself. And if people don't recognize my authenticity because I don't include God's name, that is not my problem.
That sounds exactly right to me, and it deserves careful consideration because R. T. Kendall writes from a more charismatic viewpoint regarding spiritual gifts.
I don't offer this to stir up any controversy or to hurt anyone's feelings. I just think we throw around God's name too casually these days, and we attach his name to our own statements in order to get people to listen to us. You don't have to say "the Lord told me." If the Lord really did tell you, the rest of us can probably figure it out.
Let's all be careful how we use the Lord's name lest we be guilty of taking his name in vain and violating the Third Commandment.
And I thank R. T. Kendall for having the courage to write as he did.
Posted by FBC -Cell J at 4:40 PM