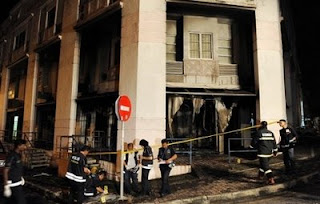 The burning of Metro Tabernacle Church was a blessing, Praise God! God works in misterous ways. Read this testimony I received from a friend in K.L

Very encouraging testimonies.
Anyway, the reason for writing is to encourage each and everyone of us. My colleague, Celia Tham is a member of the Metro Tabernacle church. This morning (my 1st day back at work) she shared with me the wonderful testimonies that has happened since the burning of their church. And I would like to share the same with you all too.

1) The night before the church was burned their Pastor was at the church past 11pm because he wanted to check his emails. He is a very hardworking person and has a habit of wanting to complete his work as much as possible. But he is also very sensitive to the Holy Spirit. When he got to the church premise and was about to swipe the card to open the door, he had a terrible stomachache that he had never had before. He knew that the Lord was telling him to go back home and he obeyed and left the church premise. It was past midnight that the church was torched. If he had not obeyed he would have been burned alive and would not be able to live to tell this wonderful testimony. God still has work for him to do on earth. His time was not up yet.
2) The MTC had trouble moving to the new premises in Batu Caves . They had been waiting for approval from the Local Authorities and is still pending. Then they were facing financial difficulties as they needed to buy new furniture for the new premise. They had been raising funds on their own to relocate to Batu Caves but had been stuck due to approval permits and raising more $ to buy new furniture and equipment. So when the church was burned it was all the old stuff that they had been wanting to get rid off! And our Govt compensated them RM500K and CIMB and many other donations started to pour in. From an adversity it turned into a blessing! Our God truly provides!
3) Celia has been rejoicing in the office and shared with my MD. Today at our Management meeting, the MD said I had never seen anyone so full of joy when the church got burned down but instead she said it was a blessing.
4) Celia said the church leaders and members shook hands with Najib and they released forgiveness for whatever that has happened in the past. She said Najib felt very welcomed at the church. Hishamuddin commented that during his visit he has never seen so many smiling faces when their church had just been burned down. To God be the glory!
5) They also requested for the Batu Caves new church premise to be turned into a place of worship and not a commercial zone. The Selangor Govt is looking into it and the MB, Khalid gave his assurance that he will look into it personally.
6) The Metro Tabernacle worship service appeared in the International Herald Tribune (they were on international news) and the photo of the worshippers with their hands raised was taken in the Wisma MCA hall. My MD asked what was happening and Celia told him we were praising and worshipping God. MD didnt know that this was how we praised and worshipped God.
7) A few years ago a visiting speaker from overseas prophesied that the MTC would be in international news. At that time the congregation thought that their Pastor would be traveling around the world to preach as he was already doing that but she said now they understood what the speaker said. I told Celia if it was the doing of man, God would not be glorified but when it is not of man, then God would be glorified like in this situation.
8) It was good to see many church leaders of other denominations coming together at the MTC worship service over the last few days, united and praying together.
9) Lastly, sometime last year Celia approached me and said that she has been praying and she was convicted in her heart to give me an invitation to ask our church/cell to partner with them in prayer with regards to the move to the new church premise in Batu Caves . They were facing a lot of spiritual warfare. I remember sharing with the cell. We didnt know very much about them then. God is moving amongst us and we could choose to obey his call to pray or disregard and miss the excitement and blessing

I hope the above sharing would have encouraged us all to press on and serve our Almighty God. MTC has found favour with God and so has many other churches. We must increase our faith to the next level and stay united. PRAYER is the only powerful weapon God has given to all of us. Lets use it mightily for His Glory!