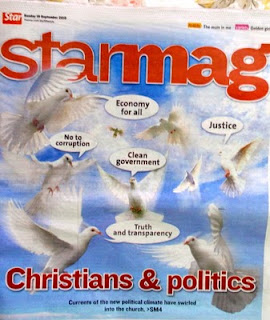 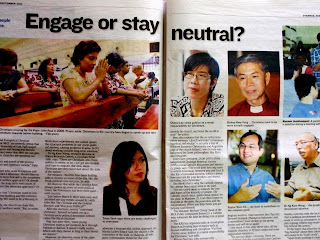 Today, in our national paper The Star an interesting article on Christians and politics in Malaysia was published. What exactly should the Christians in this country do?

After the political "tsunami" of March 2008,where the ruling party lost their firm grip on the country's politics, things have not been the same in many areas affecting our lives. People are more forthcoming, and feel more freedom in saying their minds. Like the article in The Star today. This news would not have been published prior to March 2008.

Basically the Christians in authorities agreed that Christians should participate in the political sphere in this country because if we want a righteous society we have to participate in the political processes. Politic is not a bad word, although due to historical and cultural influences, it appeared that way. One commentators said, being involved politically does not mean creating a Christian political party, but be part or a member of a political party whether it is in Barisan National or opposition. It does not matter as long as we are righteous in the things we want to do.

This article also brought to my attention what some of our Brothers and Sisters in Church were sharing that where ever our stations, be it work place in government services, or private, we as Christians need to play our parts and make changes instead of running away. One Sister said, "God intended that we stay in this country because we are born here", therefore bring changes for the better, don't encouraged your children to migrate overseas. Our home is this nation, let us all actively make this country a great and peaceful one. Pray for our nation. How appropriate for The Star article to appear just as we completed the 40-day Fast and Pray for our Nation under the auspious of NECF(National Evangelical Christian Fellowship).