Stephen Hawkings - There is no need for God 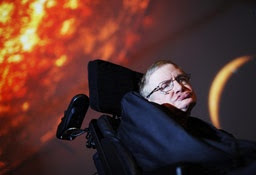 The Physicist Stephen Hawkings, in his soon to be released book, "The Grand Design" claimed that there is no need for God. That the universe can be created from nothing. He writes “the universe can and will create itself from nothing” because there is a law such as gravity. Sir Isaac Newton who discovered gravity already warned about using gravity to view the universe as a machine, like a clock. Hawkings said further "Spontaneous creation is the reason there is something rather than nothing, why the universe exists, why we exist,” he writes in his soon-to-be-released book, The Grand Design. “It is not necessary to invoke God to light the blue touch paper (fuse) and set the universe going."
Because Hawkings is a famous physicist, what he says carries weight. I suppose some peoples' faith may be shaken by what he said. For me, I believe in our Almighty God.
Many Christian apologists and theologians disagree with him. For example:

In the United Kingdom, where Hawking resides, Denis Alexander, director of The Faraday Institute for Science and Religion, said Hawking was “missing the point.”

"Science provides us with a wonderful narrative as to how [existence] may happen, but theology addresses the meaning of the narrative," he said, according to CNN.

Chief Rabbi Jonathan Sacks of the United Hebrew Congregations of the Commonwealth, similarly, accused Hawking of making a "misinterpretation" - one that he said "is damaging to religion and science in equal measure."

"Science is about explanation. Religion is about interpretation," he wrote in the U.K.-based Times, which first printed excerpts from The Grand Design on Thursday.

"Science takes things apart to see how they work. Religion puts things together to see what they mean. They are different intellectual enterprises," Sacks added.

Labels: Stephen Hawkings - There is no need for God