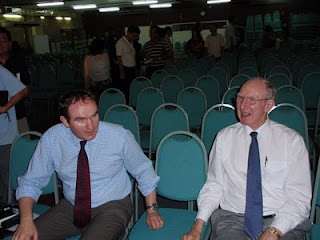 John Carter, Bible teacher, and elder of Holborn Church, UK is here again in Kuching to deliver a few lectures on the Book of Ephesian. John Carter is no stranger to many Malaysian, as he has been helping Malaysian churches for the past three decades. Last July he and his son Andrew were here to teach on the first eight chapters of Romans. His son is the pastor of Therfield Chapel, near Cambridge.

Last evening Bro.John covered on the first seven verses of Ephesian chapter one. He will be giving a series of lectures over these two weeks.

Note: Picture of Bro.John and Bro.Andrew
Posted by FBC -Cell J at 8:23 PM