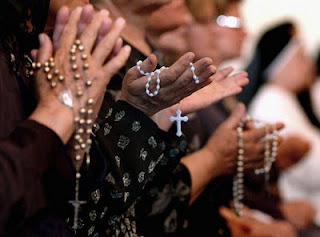 Last year many things happened and some were earth shaking events like the Haiti earthquake. An on line magazine reported that spiritual trend is more difficult to notice because media usually reports on secular events.

2. Muslim converted to Christianity increased. More came to faith in Jesus in the last 1o years than the last 15 centuries.

3. Threat of Islam prompted backslash. E.g several countries in Europe banned the use of full veils.

4. Christianity growing in Asia. Spiritual revivals sweeping Asia. China is an important harvest field. Christians there are said to number at least 70 million, and growing.

7. Young Americans lost faith. Those born between 1980 and 2000 do not consider religion important.

To read more click on the title of this post.
Posted by FBC -Cell J at 4:19 PM