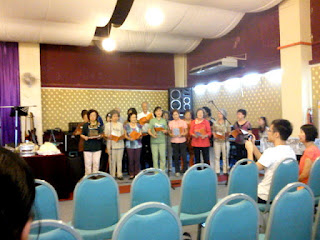 This morning our church hosted a group of seniors Brothers and Sisters from Pantai Baptist Church, Kuala Lumpur. They were led by Pastor Isaac Yim, the former Senior Pastor of First Baptist Church, Kuala Lumpur. Pastor Issac had preached in our church before. This group of seniors are in the music ministry and they called themselves the Carice Ministry. They encourage people with their singing. The age of these seniors range from 50s to 80s. The oldest is a Brother of 83 years old !

Another group worshiped at Agape Baptist Church this morning.

These seniors entertained our church with two hymns. The music box they brought was out of order, but praise God that in our midst we had Sister Si Ai to accompany them with music from an electric organ!

After the songs, Brother Chan Man Kiong from Pantai Baptist Church gave a powerful testimony of how he came to the Lord. Bro. Chan was a businessman and about 11 years ago he just fell onto his factory floor, his workers brought him to the hospital and doctor said he had a stroke. As he was attended to by the doctor he saw light above, but on the his side was darkness representing death. He was so afraid he called on Jesus to save him. Before that he never spoke of Jesus. He said he was fortunate to have attended a mission school when he was young and there he learned the story of Jesus. Later, doctor told him his heart had to be operated on. He cried to Jesus so that he did not have to go through the operation. Praise God that his request was granted. Bro. Chan said that if he had the operation he would not be in our church to testify of his conversion. After this incident he decided to sell his business and live his life for Jesus. Praise God for this powerful and encouraging testimony!

Our God is good, He provides and heals.

Note: above is a picture of the seniors singing.
Posted by FBC -Cell J at 1:31 PM