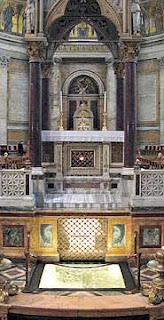 Pope Benedict XVI said last night that bone fragments found inside the tomb of St Paul in Rome had been carbon dated for the first time, "confirming the unanimous and uncontested tradition that they are the mortal remains of the Apostle Paul".

He said that archaeologists had inserted a probe into the white marble sarcophagus under the Basilica of St Paul's Outside the Walls which has been revered for centuries as the tomb of St Paul.

The pontiff said: "Small fragments of bone were carbon dated by experts who knew nothing about their provenance and results showed they were from someone who lived between the 1st and 2nd century. This seems to confirm the unanimous and uncontested tradition that these are the mortal remains of Paul the Apostle."

The Pope, who said the discovery "fills our souls with great emotion", made the unexpected announcement during Vespers at St Paul's Basilica last night, marking the end of the Pauline year held in honour of the apostle. He said that as well as bone fragments, archaeologists had found grains of red incense, a piece of purple linen with gold sequins and a blue fabric with linen filaments in the tomb.
Posted by FBC -Cell J at 9:05 PM