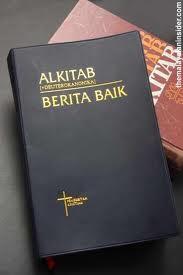 Today in The Star, the government said the 10-point solution is the end of the Bahasa Bible(Malay Bible) issue. Really ?

The Home Ministry Secretary General said he has received instruction from Datuk Idris Jala to retamp the 30,000 Bibles with "Invalidated by KDN" ( KDN Malay language for Home Ministry). Datuk Idris Jala had also on 9th April met with Association of Sarawak Churches (ACS) to explain the 10-point solution. There will be no more stamp or serial numbers on the Bibles for the future, Bibles can be printed or imported into Sarawak. This appeared that the Bahasa Bibles for East Malaysia - Sarawak and Sabah seemed to be solved.

However, there was no news about similar case in Peninsula. Recently after the announcement of the 10-point we heard that Christians organizations disagree with the double standard regarding the Bahasa Bible, that is stamping, serial numbers for Peninsula and non for East Malaysia.

At this juncture, it appears that the Bible issue is long from over. Christians Federation of Malaysia(CFM), had asked all Christians to remain calm in resolving this issue and many other issues that are outstanding.

As Christians we continue to pray for peace for this nation, and for a rational government who is sensitive to Christians as well as others in our country. Let all Christians be united in prayers in obedience to our God because He commanded us to pray unceasingly.

To read the news article click on the title of this post.
Posted by FBC -Cell J at 3:54 PM