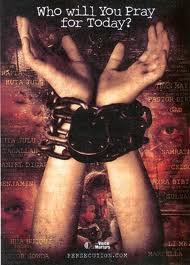 What have been happening in Malaysia recently regarding the Malay Bible issues and other issues the Christians are having with the authority are forms of persecution. These are mild forms as compared to many around the world that we read in the news.

One of the inspiring story of persecution, was that of Bishop of Smyrna, Polycarp. He was martyred in AD 155 because he would not denounce Jesus Christ as Lord even though he was ordered by the Roman Proconsul. He was burnt on the stake to death.

Persecution appeared to be beneficial to the Christian faith. Like the 10 major persecutions in the past was supposed to wipe out Christianity, but they did not. Christians became stronger.

Persecution has unify Christians, even today we can witness this in Egypt, China, Sudan, Malaysia etc.

Jesus said " 'A servant is not greater than his master.' If they persecuted Me, they will also persecute you" (John 15:20).

Jesus has warned us that we will be persecuted if we chose to follow Him.

To read the full story click on the title of this post.
Posted by FBC -Cell J at 4:49 PM