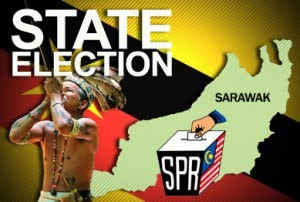 This election is historic, never before were there so much activities both in the political and spiritual arenas. Almost all Federal Ministers are here to campaign for the National Parties (BN). Even the Prime Minister is staying for one whole week here in Sarawak to support BN ! Effectively he has taken over the management of the election campaign. This is never heard of in Malaysia. The stake is high for BN because this state election is a barometer for the coming general election.

Spiritually, at least from the Christian view point, this period has been unprecedented in the history of Christianity in this country. The fervency in worship and the unity amongst the Christians community has been tremendous. One can witness this spiritual highs when attending the several prayer rallies organized in Kuching the past few weeks. Not only that, Christians all over the country are praying for this Sarawak state election. Sarawak is a Christian state, about 43% of its people are Christians.

Christians in this nation prayed that the new state government will be a fair and just government. It should also grant religious freedom to all its people. We pray for peace in this country and all its people are treated fairly by the government. We also pray for a peaceful, fair election process tomorrow in all the polling stations in Sarawak. We also pray that all eligible Christians will go out to cast their votes. We have prayed and may our Lord guide us in our decision. In Jesus Most Precious Name, Amen.

To read some news from an online newspaper, click on the title of this post.
Posted by FBC -Cell J at 2:31 PM