Chrislam Movement in US 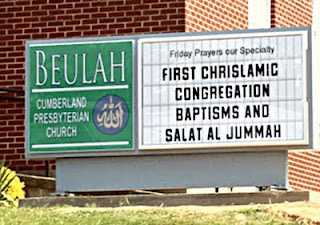 The term "Chrislam" refers to the teachings of Christianity combined with Islamic teachings. There are some churches in the US that designed their sermon with ecumenical reconciliation between Christianity and Islam. It seem like this movement gained momentum when former President George W. Bush commented that Jew, Christian and Muslim worship the same God. Later on, prominent pastors Rick Warren of Saddle Back and Robert Schuller of Crystal Palace sharing about this issue in two different conferences. These two pastors were accused of compromising their stand as Christian.

In other reports, Christians commentators have called this movement anti-Christ because some churches have compromised their Christian stands by accepting Islamic teaching in their churches. If this is truth, it is dangerous. It is clear that Jesus is the only way, and there should not be any compromise here.

Labels: Chrislam Movement in US

I appreciate that there are many blogs who will exaggerate or blow things out of proportion but upon some further investigation there does seem to be something to comment on. This article seems to at least explain both religions and the problems surrounding a combined religion like Chrislam. See here http://www.squidoo.com/chrislam

Widemouth, thank you for your comments as well as sharing more information from www.squidoo.com