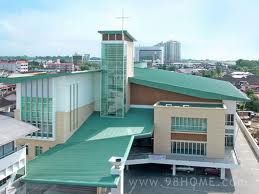 On 20th Aug and 21st Aug 2011, Trinity Methodist Church (TMC), Kuching had their Alpha Weekend Away at Christian Worship Centre (CWC) about 40 minutes drive from Kuching.

Trinity's Alpha organizer, Bro.Vincent had invited Alpha Malaysia Trainers couple, Bro. Lee Kee Huat and Sister Guy to help conduct this week end away. Bro. Tzin Kit and I were invited to help out as well. We from First Baptist Church (FBC) were glad to be able to help out in this Alpha Weekend Away.

This is the second Alpha Classic conducted by TMC and they were very encouraged by the response from the guests. All in about 16 guests attended. They were from varies backgrounds. The course is being assisted by a number of TMC members led by Bro. Vincent.

Praise God that the weekend went well despite the lack of organization as commented by Bro. Vincent. Indeed, the Holy Spirit visited the guests as well as the helpers. During ministry time on Saturday 20th many were overwhelmed by the move of the Holy Spirit. A number of guests and helpers broke down in tears as the Holy Spirit convicted each individual.

On Sunday 21st Aug, Pastor James Chin from TMC anointed each guests with oil on the fore head followed a prayer.

Bro. Ting Meng Choon and Bro.Jonathan Ngu helped to relax the guests by interceding the sessions with hilarious ice-breakers that all of us enjoyed. Many were entertained by the multi-talented Ting Meng Choon and he is well known at TMC from TMC(Trinity Methodist Church)! Bro. Jonathan did well with his "handsaw handsake".

Glory to God that all had a blessed and worshipful weekend away and many were able to witness the blessing of the Holy Spirit.

On behalf of the organizing committee, we thank Bro. Lee Kee Huat and Sis. Guy for making time to help TMC.