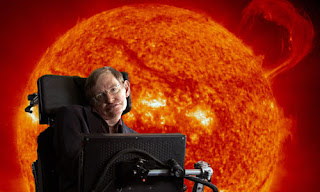 Professor Stephen Hawking is a famous British Physicist. At age 21 he was diagnosed with motor neurone disease. He is on wheel chair, and could not speak.

In a recent interview he said "I regard the brain as a computer which will stop working when its components fail. There is no heaven or afterlife for broken down computers; that is a fairy story for people afraid of the dark."

There are many people like him who do not believe in God. However,research has shown that believing in God is part of being human ( Read the previous post ). Christians believe in God because God created us in His image, and He is the one who has given us this natural tendency to look towards Him. We are created to seek after Him, and to worship and praise Him.

Hawking said the brain is like a computer is too simplistic because we know that our brain is far greater than any computer. It has power beyond any computer too, and all these abilities are God given.

There are also many cases of people who returned from the dead and testify to witnessing heaven and afterlife. Most of these testimonies have similar scenarios and these people do not know each other before they died. Therefore, these must be true.

It is insulting to hear that those who believe in heaven and the afterlife are afraid of the dark! Hawking is dead wrong!

Christians believe in afterlife, in fact eternal life if we are followers of Jesus.

John 3:16 - "For God so loved the world that he gave his only Son, that whoever believes in him should not perish but have eternal life". RSV
Posted by FBC -Cell J at 9:10 AM