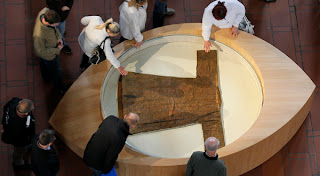 Pilgrims try to touch the ‘Holy Robe,’ reportedly worn by Jesus Christ, during the 20th pilgrimage in the German Cathedral of Trier on Sunday. The ancient town of Trier marks the 500th anniversary of the first public appearance of the Seamless Robe of Jesus. Some 500,000 pilgrims are expected to visit to see the relic til May 13, 2012, since its last appearance dates back to 1996.