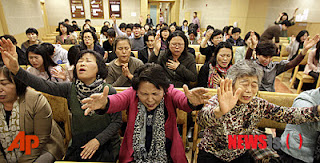 
South Korea has the second largest Christian population after the Philippines.

Many people believed Lady Gaga is promoting Satan from the lyrics of her songs to her dressings and props in her performances.  What she is doing is negative and dark.  No right thinking people would do such things unless they want to exploit the situations.  Her songs attracted many young people, and they do not realized that these songs and messages are working on their subconscious minds.  Before they know it, they are caught in darkness.

Christians should stay clear of her performances.