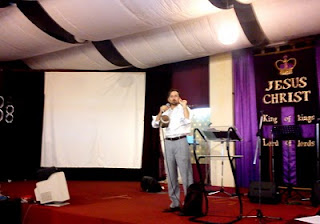 Today Sunday, we had interesting sharing from two brothers. Some how their messages were similar although there was no prior arrangement among these two brothers. In a way we can say this was something from our Lord, as a message that He wants us to hear in Church.

Brother Dr. Adam, an American has just attended a six-day course with the Haggai Institute here in Kuching. Dr Adam works here as a medical doctor. This course here was meant for people in this region and not meant for American. Yet he was here to attend. In fact, he had to decide whether to attend an international medical conference or Haggai, and he chose Haggai because he was inspired by a dream he had earlier. In his dream he was asked what he will do if he was to die the next day. Matthew 7:13 spoke to him. This verse said a narrow path leads to life and he broad path leads to destruction. Another example he gave was playing American football back home. He was a quarter back, and one day his coach asked him to call the shot at an important competition the following day. But he said he could not because he had not been trained to take that role. His coach asked him to do it, and he had to do it. Adam's team was playing a champion team that had not lose a game, and there he was leading his team against a champion team. Adam stepped out in faith, and his team won 28 points! We Asians don't know much about American football, but hey 28-0 got to mean winning by a large margin!

Next, we had brother Song sharing from Mark8:31 to 9:32. In fact the title of this blog is his topic of sharing. Again here he shared about stories of people making choices for God instead of the world. He said, a man by the name of AD Leong an ex drug dealer from Bintulu sentenced to death and later sentence commuted to life in prison, due to good behavior he was released after 15 years. He chose his name as "AD" which to him means "after death". Yes, his old self died and he met Jesus in prison and turned a new leaf. Now he goes around schools to teach the young people. He operates a tailoring shop to support himself. AD made the right choice by traveling on the narrow path that leads to life.

Another story was about an Australian woman Cindy who got involved in drug with his uncle. His uncle escape from police but she was caught and imprisoned. After she came out she got married to a drunkard husband. One day she thought of killing him to end her pain. She cried "If there is a God help me!". While at a petrol station she met an ex convict who asked her to join him to church. She went with her husband and became a believer as a result she did not attempt to kill her husband. Later he died of natural cause. Cindy studied for a counseling degree and now she counsel young people to get them off drugs.

Today, we really have inspiring stories from our Brothers and more importantly teaching from the Bible to make the correct choice and to stay focus on Jesus.
Posted by FBC -Cell J at 3:48 PM