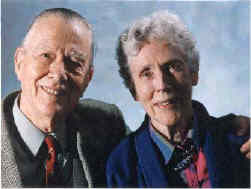 I learnt about Dr Brand from reading books by re-known Christian writer Philip Yancey. Dr. Brand was born in India to missionaries parents. At age 9 he was sent to Britain to study. After completing his medical degree he went back to India to start a leprosy sanatorium. He was an expert in leprosy treatment and dedicated his life to helping patients who were treated as outcasts in India. He was full of humility and sacrifice all for his patients.

In Philip Yancey's book, Soul Survival he described Dr Brand's life as well as his sacrificial work for the lepers in India. His life story was very inspiring, especially when one reads about how much efforts he put in just to help the lepers. Pain is a gift because lepers could not feel pain,so they hurt themselves without knowing until it was too late for treatment. In a way, he tried to help the patients to feel pain. Dr. Brand co wrote the book "Gift of Pain" with Philip Yancey.

His life is an example for Christians all over, he lived like Jesus. A servant to the patients he served without complain.

Read what one of his patient, Sadan said, "Still I must say I am happy that I had this disease. Apart from leprosy, I would have been a normal man with a normal family, chasing after wealth and a higher position in society. I would never have known such wonderful people like Dr Paul and Dr Margaret (Mrs Brand), and I would never have known the God who lives in them".

Dr Brand knew God made human in his image, and how our bodies are wonderfully made.

Philip Yancey said,
"Dr. Brand would just marvel at the wisdom of the Designer in putting together the body. [Dr Brand was] the first person I had ever met who marveled at the design of the pain system in the human body. But he would say, ‘Thank God for pain. If there’s only one gift that I could give my leprosy patients, it would be the gift of pain.”
Posted by FBC -Cell J at 2:40 PM