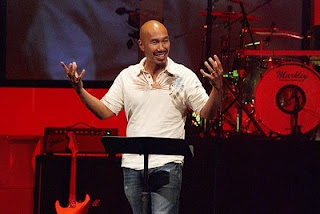 A while back, I blogged about Pastor Francis Chan of mega Church Corner Stone, Simi Valley, California. He has since left the church because he did not want the "celebrity status" to get into his head. He was humble enough to recognize that he may be way led, at the same time he felt God's call for him to do something else. It was understood that after visiting and witnessing the poverty in Africa, upon his return to US, he sold his big house and moved to a smaller house, the extra money were given to support the poor.

The fact that many people call themselves Christians but do not live like Him or obey His commands disturbed him. Now he is producing films called "BASIC" to address this issue. Pastor Francis was also disturbed that people would travel 60 to 70 miles just to hear him speak.

His message is that we need to follow the commands of Jesus and live like him. Although his message seem to direct to audience in the US, but I believe this situation is happening in many countries, including ours - Malaysia.

To read more click on the title of this post.
Posted by FBC -Cell J at 4:53 PM