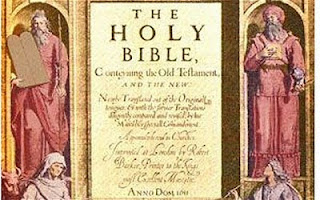 The King James Bible is also known as the Authorised Version of the Bible in Britain. The first copy was written in 1611, so now it is 400 years old. Originally this Bible was written for the use of the British Isle, but as you are aware, the Bible is now used by the whole world.

Some said it has sold 2.5 Billion copies in various versions, other said it sold 6.5 Billion. Whatever is the number of copies,many agreed that it is the best selling book of the world! Praise God!

The Bible is God's breath.

16 All Scripture is God-breathed and is useful for teaching, rebuking, correcting and training in righteousness,
Posted by FBC -Cell J at 5:22 PM