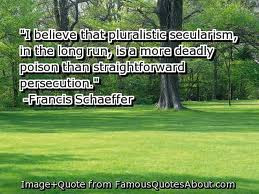 Secularism is about separation of state and religion. The state should be independent of religous belief.

In fact, this threat is real and it is there all over the world. This state of affair is worsening by consumerism, materialism and the popular culture of sex and violence that is happening around the world. The young generation seem to be caught in this situation and many do not know God.

In the Malaysian context, our country is also facing this problem. Not only is secularism encroaching into society but the minority Christians are facing Islamization in this country and also the persecution of Christians like forbidding Christians to use "Allah" to refer to God in their Malay language Bible. This is an outstanding issue in our country.

Christians cannot take lightly the problem of secularism because it is subtle. Theologian Francis Schaeffer commented that secularism is more dangerous than direct persecution.

It is important to defend our faith and to evangelize to the lost. Despite up hill battles, we must not lose heart. The battle is of the Lord and not ours.

Watch this video about secularism.