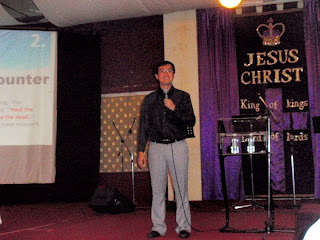 This morning our church had the honor of Pastor Teo Chung Hock from New Life Petaling Jaya branch to share with our congregation. He has been invited to host our church's youth camp over the next few days.

New Life has an Iban language branch here in Kuching.

During the morning service Pastor Teo shared his inspiring testimony. He hails from Miri and now a pastor in Kuala Lumpur. Before he became a Christian, he hated Christians and called them hypocrites. His sister in K.L was a fervent Christian then and when he has to go to K.L to attend college he warned his sister not to bring him to church. Knowing that he will not have anything to do with church, his sister introduced him to the church's youths who befriended him. Since he did not want to go to church, his new friends brought him to cell meetings. Teo agreed and he told himself that he wanted to prove to the Christians that he was a more righteous person than the Christians. The cell meeting was held weekly and he attended weekly to show that he was a better person than the Christians. He even sneered at the Christians who missed some of the weekly meeting. As for him, he never missed any of the meeting ! As he get to know more about Christianity and also the love shown by his new friends, he said to himself that Christianity was alright. Slowly he was moved by God. After 4 months of cell meetings, during a worship session he accepted the Lord. That day was 24th April 1996. At that time his sister did not know of his conversion yet, and as he reached home his sister gave him his first Bible, than he broke the good news to his sister. Hence, he can remember the date of his conversion clearly. A very significant and meaningful day in his life.

After working in the secular world for 5 years he felt God calling him to full time church work therefore he joined New Life in 2004. In 2008 he was installed as a pastor in New Life Church, Petaling Jaya.

Praise God for his testimony! A person who hated Christians before now he is a pastor!

To go to New Life website click on the title of this page.
Posted by FBC -Cell J at 8:13 PM