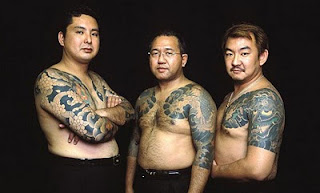 Last evening, Good News Fellowship hosted an evangelistic meeting. The guest speaker was Pastor Kaoru Inoue a former Yazuka general, Japanese Mafia. He has tattoos all over his body.

He was born in Hokkaido to a very poor family. By age 22 he joined the Yazuka and began to take drugs. As a Yazuka he committed many crimes, and being addicted to drugs he found no meaning in life. He tried committing suicide unsuccessfully twice. His friend asked him to work in his construction site for one month. During that time he met his future wife. One day his girl friend invited him to a village festival, after that she gave him a gift in place of a coat he had lent to his girl friend but she had misplaced it. He took the gift home not realizing that it was a used Gideon Bible. Since it was from his girl friend he kept it by his bedside each night. Some how he was drawn to read the Bible. When he came to Matthew 5:30 he was touched by the message. Later his girlfriend invited him and his boss to a dinner in the church hosted by her pastor. On the way home, he asked his boss to release him from the Yazuka gang, miraculously his boss agreed. His boss also knew that 4 of Inoue's best Yazuka friends had died of various circumstances. ( It was not easy to get off the gang once you joint). Kaoru Inoue found that people in church love him, unlike the world outside no one cared for him. He became a Christian, and he told his boss to quit Yazuka but he refused. Inoue said he will pray for him to quit, after two years his boss quit! Pastor Kaoru Inoue always believes in prayers. He prayed for his own father who came to Christ two years after Inoue was converted. Praise God!

Pastor Inoue encouraged everyone to look to Jesus who can save and heal our sicknesses. Even a hardcore Yazuka like him can be saved. Nothing is impossible for our God.

Note : Picture above, the center guy is Pastor Kaoru Inoue