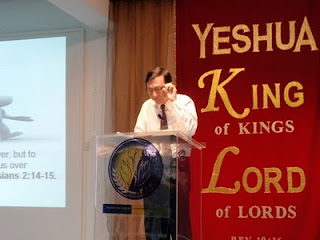 On Sunday 31st Oct 2010, I attended People's Park Baptist Church, KL (PPBC)with fellow Alpha bro.Jack and his wife Sis.Vicky. It was my first visit to this Church and I found that their format is the same as our Church. We started with prayer. Before we gathered into small group of 2 to 3, their Chairman Dr. Living Lee shared on the subject to pray on. He shared about the need to pray that our government will become more transparent in its dealings. He related that he had just attended a conference organized by Transparent International (TI), where its Chairperson Datuk Paul Low shared how the Selangor government got TI to institute properly accountable systems in some operations of the local government. The Sarawak government had also invited Datuk Paul Low to speak to their top officers about being transparent and non corrupt in what they do. Praise God that the government is improving in terms of non transparent practices. Let all Malaysians Christians pray about this.

Their Pastor Philip Koh preached on Mark 3:20-33 in particular about unpardonable sins. What is unpardonable sin? In Mark 3:29 "But whoever blasphemes against the Holy Spirit will never be forgiven, he is guilt of an eternal sin". Relating to unpardonable sin, Got Question ? website stated:

The only unpardonable sin today is that of continued unbelief. There is no pardon for a person who dies in unbelief. John 3:16 tells us, “For God so loved the world that he gave his one and only Son, that whoever believes in him shall not perish but have eternal life.” The only condition in which someone would have no forgiveness is if he/she is not among the “whoever” that believes in Him. Jesus said, “I am the way and the truth and the life. No one comes to the Father except through me” (John 14:6). To reject the only means of salvation is to condemn oneself to an eternity in hell because to reject the only pardon is, obviously, unpardonable.
Posted by FBC -Cell J at 5:34 PM