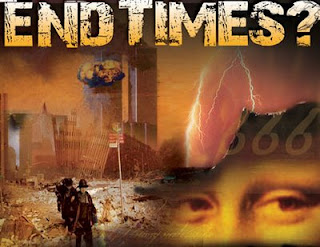 For many years many people including Christians were predicting the 2nd coming of Jesus Christ. However, all these predictions did not come true. Recently someone predict that Jesus will return on 26th May 2011. That's very near!

Recently in many parts of the world we saw earthquakes, famines, drought, heavy snowfalls, huge floods,wars, it is natural to assume these are also signs of end time.

This morning Pastor Richard preached on the above subject based on Mark 13:1-37. Even during Jesus' time His disciples were asking Him about the signs of the end of this world. After describing all the calamities which He said we will experienced, He said He did not know either. He said 32 “But about that day or hour no one knows, not even the angels in heaven, nor the Son, but only the Father. 33 Be on guard! Be alert[a]! You do not know when that time will come. 34 It’s like a man going away: He leaves his house and puts his servants in charge, each with their assigned task, and tells the one at the door to keep watch". Jesus said only the Father knows when is the end time. Meantime, He advised us to be alert and keep watch.

This morning we have a friend from Kalimantan, Indonesia, Dr. Gary. He is no stranger to us having visited us many times before. He is a missionary from US running a hospital in the deep jungle of Kalimantan. Dr.Gary started it some 45 years ago, and it is thriving. They have about 25 doctors and more than 100 nurses working in the hospital. It is an inspiration to see such sacrifice by Dr.Gary and his team. He could have been in the US, earning huge sum, but he felt the call of God to serve in Indonesia. At the suggestion of our elder Dr. Tiong, our congregation gave a love offering to Dr. Gary to help in running the hospital.
Posted by FBC -Cell J at 3:13 PM