Powerless to pray in the House of God 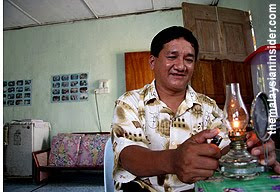 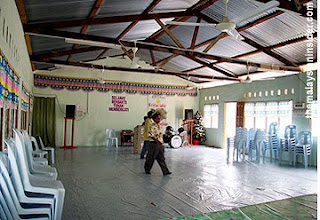 This is a touching story of our follow Christians Brothers & Sisters in Pahang. They are without electricity. Nonetheless, lets pray for them. Our God is great and He will deliver His people in due time.

PUTRAJAYA, Aug 12 — Hope continues to flicker for a small community of Orang Asli Christians in Pahang who have struggled for the past six years for the basic right to worship God.

The Court of Appeal here today granted the Jahut Christians from Kampung Pasu the right to challenge the Temerloh land and district office's refusal to supply water and electricity to their tiny village church, located some 200km from Kuala Lumpur.

The three-man Bench led by Datuk Zainun Ali unanimously overturned the Temerloh High Court's decision last year, clearing the path for the aboriginal Christians to get water and power supplied to their humble dirt-floor church, which also doubles up as a community hall for the villagers.

Zainun also ordered the land and district office to pay RM5,000 in costs to village elder Wet Ket, 59, and his son Yaman Wet, 33, who filed the suit against the local authorities for blocking them from getting the most basic amenities supplied to the church built in their own backyard.

The land and district office, in a letter dated Oct 8, 2007, explained that the church should not be given water and electricity because it is an illegal structure built on ungazetted land and the church had not been given formal approval from the state government to be built, as is required under state law for non-Muslim places of worship.

[Former live-in pastor, Jamin Singa was forced to move to Mentakab after authorities refused to supply water and electricity. He returns every weekend to lead the villagers in prayer, putting up with kerosene lamps, bathing in an open air outhouse, stifling heat and mosquito attacks at night.]

Former live-in pastor, Jamin Singa was forced to move to Mentakab after authorities refused to supply water and electricity. He returns every weekend to lead the villagers in prayer, putting up with kerosene lamps, bathing in an open air outhouse, stifling heat and mosquito attacks at night.
But lawyers for the Jahut Christians, Lee Swee Seng and Annou Xavier, convinced the judges that the Aboriginal Peoples Act 1954 did not require the Orang Asli to first get permission from the state or local government for any building on their native land.

“The purpose of the 1954 Act was to 'protect and uplift’ the First People of this country. It is therefore fundamentally a human right statute. It acquires a quasi-constititional status giving it a pre-eminence over ordinary legislation. It must therefore receive a broad and liberal interpretation,” Xavier said, citing a judgment from an earlier case upholding Orang Asli rights, in reply to a question `from the judges who wanted to know if the law clearly outlines the “rights” of the Orang Asli.

The ethnic Jahut have faced much government red tape in carrying out their religious worship since embracing Christianity in 2000.

[Despite the many trials and tribulations, the Jahut Christians in Kampung Pasu keep a cheery outlook for the future of their sunny-coloured church. To the right is village elder Wet Ket's ancestral home.]

Despite the many trials and tribulations, the Jahut Christians in Kampung Pasu keep a cheery outlook for the future of their sunny-coloured church. To the right is village elder Wet Ket's ancestral home.
Their first church, costing RM25,000, was torn down by the local land and district office in 2003, just a few weeks before the villagers, mostly farmers and labourers, planned to celebrate their first Sunday service in the building.

It was only after repeated petitions to the prime minister that the federal government awarded RM35,000 to the villagers to rebuild their church, leading them to believe that they had finally gained the green light to worship in peace and comfort.

But when The Malaysian Insider visited the Evangelical Church of Borneo outpost — better known by its Malay initials SIB (Sidang Injil Borneo) — in Kampung Pasu last year, Wet related how they were barred from pulling power from his house to the church less than five metres away, for evening services.

He had been warned by officers from the land and district office that his own electricity would be cut off if he did not immediately remove the extension cords, Wet added.

To date, the villagers carry out their worship by candlelight. Water flows from an outdoor public tap nearby but not from the ones inside the church, built to house their live-in pastor.

While the Court of Appeal's decision today cleared the first stage, it did not grant their request for their church to be supplied with water and electricity while waiting for the Temerloh High Court's final decision.

The Jahut Christians from Kampung Pasu are still powerless to pray in the house of God which they built.
Top picture: Pastor Jamin Singa
Bottom picture: The Church, also double as community Hall
Source: Malaysian Insider
Posted by FBC -Cell J at 9:26 PM

Thanks for highlighting their plight. Pl. remind our group to intercede for them this Friday.God bless.

Okay, Sister Sarah I was about to request you to pray for the Jahut Christian mentioned in the report. Our God is great certainly He will deliver His people! Hallelujah!
Alwin

Sister Sarah, thank you for your prayer for the Jahut Christian in our Cell meeting last night.
Alwin