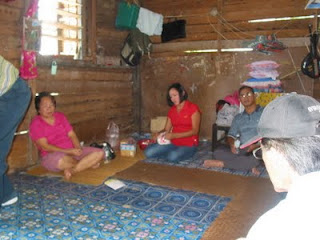 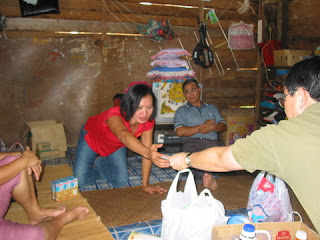 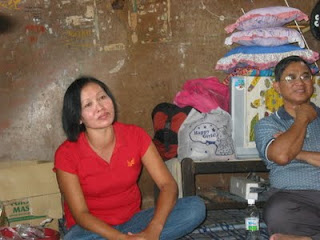 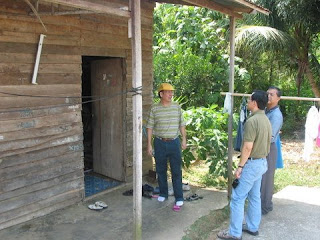 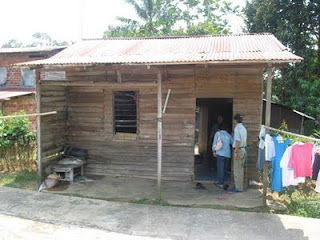 On Sunday 2 nd Aug, 2009 Brother Alfred, Sister Gloria, Brother James, Sister Lina, Brother Soon King and Brother Alwin together with Pastor Peli & his wife Nensa called on widow Guruka Ita at her hut. Her kampong was located at Lachau about 180 Km from Kuching. We were there before noon and spent about 2 hours interviewing Guruka as well as checking her place. Her house is just a small hut, about 20 feet by 20 feet the most, there was no electricity or running water. People in the kampung used their own generators. Guruka's generator is out of order, when we asked whether it can be fixed she said she did not need one. She used candles instead in order to save money on petrol for the gen set. There was practically no furniture in her hut except for a small shelve.

Guruka has poor health. She suffered from diabetes (under control), heart ailment that she seek treatment at general hospital Kuching, a growth on her right stomach,and also her right eye cannot see well. Because of her condition she cannot work,except for a little of vegetable growing in her back yard.

Beside the sundries goods that our cell members gave to her, we also passed her some cash so that she can use when ever she goes to the hospital. Transport by van cost to/fro General Hospital Kuching RM50 both ways.

During Gawai recently the people tried to climbed into her hut from the roof as there were gaps up there. Brother Alfred has asked Pastor Peli to get a person who know how to fit it for a quotation so that we can fit it.
Picture 1 (top)Nensa, Guruka & Pastor Peli
Picture 2 Brother Alfred hand over cash to Guruka
Picture 3 Guruka
Picture 4 Soon King, Alfred, Pastor Peli outside the hut
Picture 5 James and Lina getting into the hut
Posted by FBC -Cell J at 2:59 PM

hi this is a nice article.

Thank you,glad that you like it. As we have more Cell or Church activities, I will update this blog. God bless you.
Alwin