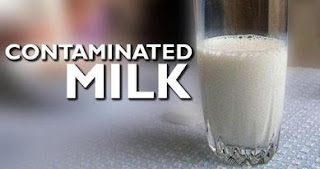 Unsettling news from China again. Just about a year ago they had a huge problem with milk tainted with melamine, now there is a problem of hormones in milk resulted in babies developing breasts! When comes to increasing profits people will do all sort of things!

"Do not wear yourself out to ger rich, have the wisdom to show restraint" Proverb 23:4

USA is worried that children are attaining puberty too early in life while in China, 15-month old babies are developing breasts. This has got the Chinese authorities frowning and they have attributed this peculiar phenomenon to the hormones in the new brand of milk powder that mothers are giving their babies. Medical tests carried out indicate that the level of hormones in three girls aged 4 to 15 months fed on the same milk powder exceeded that of an average adult female. Earlier, in 2008, there was a scandal related to Chinese milk that had melamine mixed in it to give it an appearance to be enriched with protein. Consuming such milk led to death of at least six infants and serious health problems to over 300,000.
Posted by FBC -Cell J at 3:54 PM