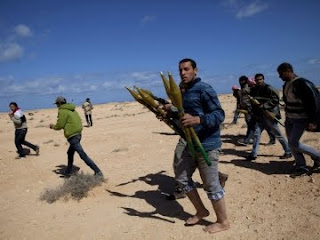 Just like Soviet Union and Berlin in 1989 where the Holy Spirit worked amongst the population to overthrow unpopular governments. Editor of Charisma J Lee Grady said we are witnessing similar patterns in Middle East.

He said we are facing Youthquake - freedom movements in the Middle East engineered by young Arabs. This youth movement has spread from Tunisia, Algeria, Egypt, Yemen, Bahrain, Iran and Libya. Social Network site like Facebook has helped with the spread of information.

People are saying, the chaos in Middle East will result in militant Islamists taking power to enable Anti-Christ to emerge, but Grady believes that the Bible is a positive Book.

He said "My Bible says Christians are called to take the gospel to every nation—and Jesus calls us to bravely preach His message no matter what obstacles we face. He does not call us to be wimps, pessimists or fear mongerers. My Bible says Christ’s kingdom will increase, and that the knowledge of the glory of the Lord will cover the earth as the waters cover the sea (see Hab. 2:14). God wants us to have a victorious mindset about the future. After all, we are on the winning team!"


Looking at situations in the Middle East it is easy to be pessimistic, but God has His ways which are better than human ways.

In any case, let us pray for peace in the Middle East.

To read more click on the title of this post.
Posted by FBC -Cell J at 5:54 PM