Tsunami in the Bible 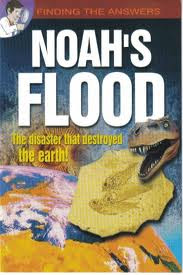 It is interesting and humbling to learn that our Holy Bible prophesied about tsunamis thousands of years ago. Thanks to scientist, archeologist and geologist, Dr. Jeffrey Goodman who had been studying the Bible to search what it says about tsunamis. In the Bible it is referred to "floods", one particular familiar ones is "Noah's Floods". He said the great flood was caused by a 3 mile wide comet hitting the earth, crashing into the Indian ocean, resulting in great foods, or tsunamis.

The Bible prophesied that tsunami will occur during end-time

8 The second angel sounded his trumpet, and something like a huge mountain, all ablaze, was thrown into the sea. A third of the sea turned into blood, 9 a third of the living creatures in the sea died, and a third of the ships were destroyed. Rev 8:8-9

Many scientists are studying the catastrophes in the Bible. Dr.Jeffrey writes:

A growing number of astronomers and planetary scientists have begun to write about how the catastrophes of "Revelation" accurately describe different types of cosmic impact, depending on whether the land, sea or atmosphere is hit. Dr. John S. Lewis, a leading expert on cosmic impacts in his 1997 book (pages 11-13) "Rain of Iron and Ice" asks "Did John (the author of the Book of Revelation) somehow know more about impact phenomena than any scientist before the present decade?"

To read more click on the title of this post
Posted by FBC -Cell J at 10:11 AM

Labels: Tsunami in the Bible