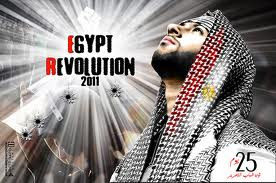 The Muslim Brotherhood featured very prominently in Egypt's recent revolution. Some experts said this may be good for democracy as well as Christians there. However, experts like Pastor Shaddy Soliman, an Egyptian now pastoring a church in Florida said otherwise. In my previous blog post I had shared about Shaddy's comments saying democracy and Islam just cannot mix. He also warned against the agenda of the Muslim Brotherhood. Now they are showing their true color by organizing a new political party called Freedom and Justice.

An exiled leader,Al-Qaradawi went home and called for the destruction of Israel including Jerusalem. This was reported :

"Al-Qaradawi asked the Egyptian army to open wide the Rafah crossing and to pray for the re-conquest of Jerusalem by the Muslims, so that he and the Muslims could pray in security at Al-Aqsa Mosque. This part of his sermon was cheered and applauded by the crowd,”

Muslim Brotherhood is certainly up to no good. This is proving the skeptics wrong that they are moderates and have peace in mind.

The minorities are certainly going to suffer when the Brotherhood takes control.

Lets continue to pray for all minorities including the Christians in Egypt, that they will unite to face their enemy. Pray for peace and that they will not suffer under the new government.

To read more please click on the title of this post.
Posted by FBC -Cell J at 3:45 PM