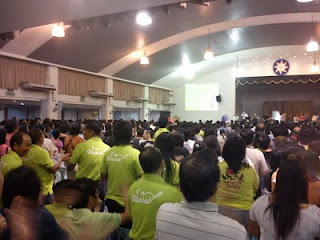 Last evening, the Kuching Ministers Fellowship (KMF) together with Sarawak Ministers Fellowship organized a very successful prayer rally at Christian Ecumenical Worship Centre, Kuching. The turn out of Christians were unprecedented, more than two thousand Christians gathered to pray for current issues such as the Bahasa Bibles retained by the authority, the general erosion of Christians' right as enshrined in our Constitution, and also the coming state and general election. The main theme was to pray for religious freedom for all Christians.

Praise God! Christians from various denominations, and various races were there in unity to pray for breakthrough in areas of religious and political freedom.

We Christians in Sarawak must pray as One to achieve breakthroughs in areas that we want to see progress. Of course, we also welcome all our fellow Christians in Peninsula to join hands in prayers for our nation.

Indeed, Glory to God for the tremendous turn-out of Christians. Only He can move so many hearts. Praise God, Hallelujah!

Note: click on the title of this post to read a news item about the rally.
Posted by FBC -Cell J at 11:18 AM