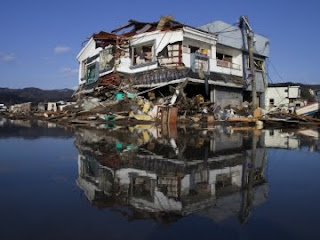 Many people are calling the earthquake and tsunami in Japan one of the apocalyptic signs. Pastor John Piper commented of this when he saw the devastation in Japan. Now author Steve Wohlberg said there are signs pointing to this direction. The natural disaster like earthquakes happened one after another, and there are man-made disaster like civil unrests in the middle east and the nuclear disaster in Japan.

According to him these signs were mentioned in the Bible. Luke 21:11 "There will be great earthquakes, famines and pestilences in various places, and fearful events and great signs from heaven".Verse 25"There will be signs in the sun, moon and stars. On the earth, nations will be in anguish and perplexity at the roaring and tossing of the sea".Verse 26 "People will faint from terror, apprehensive of what is coming on the world, for the heavenly bodies will be shaken".

These are commonly known as signs of end-time.

Worst things are yet to come.

To read more click on the title of this post
Posted by FBC -Cell J at 1:18 PM